[Public] Apply to SeventhFlight membership, to join our raids. Applications expire in 30 days unless you post replies showing continued interest

Forum rules
Applications are "open letters" between SeventhFlight and the applicant. Other applicants and/or guests shouldn't dilute those topics. We prefer to ask references through in-game mail. Abuse of the posting privilege by posting in other people's application topics is a serious issue.

Application threads should be kept on-topic while the application is relevant. This is another very serious issue, and applies to members as well. Side-tracking an application topic which is still relevant is not acceptable, and people are instead urged to post in General Discussion.

Threads in this forum are removed after 30 days with no replies.
Post Reply
10 posts • Page 1 of 1

About me
I'm from the Netherlands, 30 y/o and a game developer/ environment artist working on stuff like tomb raider / new exciting stuffs! Been playing since vanilla and just relocated to AD to play with a couple m8's here (including a guildie of urs, Adarae).


Gameplay
For now I'll be a social player, I really want to raid but I have to move to a new place first, in the process of buying an apartment atm, probably in a month or maybe two I'll start becoming available for raids. Leveling tailoring /ench to max atm, also working on cooking/fishing.

Do you know any of our members?
Adarae

What kind of gameplay experience do you have?
Raided it all...ended with 4 bosses down in mythic HFC around january, guild fell apart and stopped playing.

If you have raided before, with which groups? When did you leave them? Why?
see above.

Do you have any max level alts?
Planning on leveling /gearing a prot warrior before I want to start raiding.

Are you able to understand orders and tactics being explained on Mumble in English?
Sure.
Will Tayas' constant eating while he talks on Mumble cause you personal distress?
Maybe?

Character
Armory
http://eu.battle.net/wow/en/character/a ... ame/simple
gl with that, armory is down (also I'm a human mage now).

If you've made unusual gear choices, or have some great gear you're not wearing, please tell us about it.
How raid friendly do you consider your build? Would you be willing to respec and if so, are there any limits?
Raiding with best spec per boss.

If you have a raid-viable dual talent spec, please include that as well.
Raiding with best spec per boss.

Thanks alot for your application and welcome to our somewhat underused forums *shakes fist at Discord*!

I have looked through your application and it's overall positive.

But man ... 42 ... a random meme. That hurt. Never read Douglas Adams I take it. It's the Answer to the Ultimate Question of Life, the Universe, and Everything.
God I feel old now.

Our raids are gonna start inofficially as soon as they are out and officially probably mid october to give everyone enough time. If you need another month or two that is fine. We are not really in a hurry. We aim to have fun not server firsts

Just poke anyone in the guild for an invite as well as the link to Discord, hang out with us and see if you like the guild and the people. If you enjoy it we will get you a trial when you are ready though that is usually just a formality.


Regards,
Iluin
Seventh Flight - Home of the unhappy and depressed - but warm and naked - Raiders! Tis a home away from home.
Top

It's an english word. I used it. What more can you ask for?
Seventh Flight - Home of the unhappy and depressed - but warm and naked - Raiders! Tis a home away from home.
Top OK I wanted to avoid further defacing Wireframe's application but...

"the 1913 edition of Webster’s Dictionary"

Before the First World War. When all things were good and right still.

Plus they had electricity already. ERGO it's "Modern" English.
Seventh Flight - Home of the unhappy and depressed - but warm and naked - Raiders! Tis a home away from home.
Top 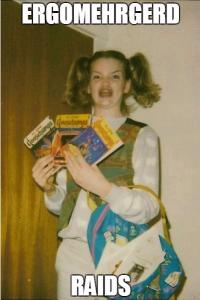 Haven't changed main for all of WoW club